Part one of a series

Labor Day, 2021: Emerging from the pandemic, Americans continue to debate both immigration and the question of whether welfare should have a work requirement. Meanwhile, Northwest Iowa continues to benefit from the work ethic that immigrants, mainly from the Netherlands, brought with them in the late 19th and early 20th centuries. They built farms and businesses and created a close-knit culture that continues to value work. World Journalism Institute students, meeting at Dordt University in Sioux Center, interviewed Iowans about what they do all day.

ORANGE CITY, IOWA, population 7,000, lies about 10 miles southeast of Sioux Center. Its volunteer fire department has responded to 21 calls over the first five months of 2021. So what do firefighters do when they’re not fighting fires?

Dan Roghair is assistant chief of the city’s volunteer fire department. His father worked for the department, and Roghair’s two sons, Andrew and Lee, are also firefighters. Since the department typically has only one call per week, Roghair works mainly as a buyer for a local paint company, but he’s passionate about the fire department he has served for almost 31 years.

He explains that firefighting takes preparation. Little things make all the difference. He keeps his pager on his left hip during the day. At night, it stays on his nightstand: “Next to my dresser, I have a hook on my wall where I have my clothes and stuff laid out … gotta be prepared … gotta take care of yourself before you take care of other people.” He lives a block away from the station and backs into his parking space on Sundays to cut down his response time.

Roghair even stays clean-shaven to ensure his gas mask properly seals to keep out fumes. He takes pride in the station and keeps a chore chart of maintenance tasks the volunteers perform, such as laundering coats, sweeping under all six engines, and testing the backup generator weekly: “Keeping the building clean is just showing respect for the community. They gifted it to us, and I want it to last as long as possible.”

Rural firefighters deal with unusual issues such as grain entrapment rescues. Hot and humid summers cause a crust to form on exposed grain, forcing farmers to open their silos and manually break up the top layer. Sometimes farmers fall into the silo and sink, since their body density is greater than the grain’s. Iowa also has many agricultural runoff ponds and creeks, so some towns form scuba teams—and Roghair, a certified scuba diver, volunteers on Orange City’s. —Christina Grube and Katherine Futch

THREE MILES AWAY from the fire station, Verlyn Sneller, 75, stands between rows of knee-high elderberry bushes. He’s co-owner of West Branch Elderberries, which operates out of a large industrial steel building that sits on 16 acres surrounded by corn and soybean fields. He retired from his job as a livestock nutritionist but still starts work before sunrise: “I’m not the kind of person who likes to sit around and wait to die.”

Sneller says few U.S. farmers are crazy enough to make a business out of elderberry, whose trendy antioxidant is marketed for its potential antiviral properties. That’s because it is a tricky crop to grow and harvest—but it can be lucrative for those willing to improvise. Sneller has had to adapt machines used to harvest grapes and blueberries, since no one makes dedicated ones for elderberries.

West Branch Elderberries gathered its first crop in 2016. It relied on church groups and members of the community to help gather the tiny dark round berries. They left with purple-stained fingers. This year Sneller will use his adapted machinery to pick the berries. Behind his desk hangs a framed slogan: “Growth is impossible without change.”

For Sneller, change means developing organic and sustainable farming methods. He’s experimenting with a biological soil supplement processed with molasses, which he stores in 250-gallon drums in a trailer kept at a steady 90 degrees Fahrenheit. He sprays the heavy, sweet-smelling mixture on his elderberries—and gives it to his neighbors for use on their crops. They are monitoring yields, and if it works he plans to market the mixture. It will help the community be better “stewards of the soil.” —Grace Kenyon and Anna Timmons

THE FLORAL MARKET lies less than half a mile from the Orange City Fire Station. Owner Erica De Jong, 40, hums along to music from a local Christian radio station as she places newly planted succulents in the front window. She has lived in Orange City all her life and married her husband when she was 19 years old in Calvary Christian Reformed Church, three minutes away. De Jong and her family live in the house her husband grew up in, on a farm that has been in her husband’s family for four generations: “We’re rooted.”

For the past year and a half she has owned the local florist shop. The previous owner focused on flower arrangements, but De Jong and her husband have added greeting cards, décor, custom balloons, and pottery. The shop is closed on Sunday, but De Jong gives employees Saturday off, too, so they can spend time with family. She credits her mother and grandmother for teaching her the joy that flowers and gifts bring people.

JAN ZANDSTRA and her husband Bart started the Zandstra Family Greenhouse 17 years ago. It’s a family business located next to their house in Hull, Iowa, about 10 miles northeast of Sioux Center. They have two greenhouses and sell annual plants such as petunias, geraniums, alyssum, and coleus during the busy season, mid-April through June.

Deciding what plants to buy is a year-long process. Jan Zandstra analyzes what customers like and what they pass over. She orders tiny root systems called plugs from suppliers, 200 plugs to a tray, and plants them in January. Snow may cover the ground outside, but inside feels like “little Jamaica.” Heated by two diesel furnaces, the greenhouse stays warm. Evaporating water that cannot escape creates a tropical effect.

Zandstra finds winter relaxing. Starting in April, though, Zandstra works 12-13 hours a day, serving the steady flow of customers. She wakes up at 6:30 a.m. to water the plants. That’s also a good time for Bible reading, because if she doesn’t take time then, she won’t have time in the rush. She and her husband often eat fast food during the busy season, but on a slow day they have time to grill bratwursts.

Inside the greenhouse, plants cover the tables. Petunias dangle over the sides of baskets hanging from the rafters. Red geraniums are the most popular plant: Zandstra orders 4,000 each year and says it is mostly a convention of Dutch culture among the older generation. She says trimming dead and overcrowding leaves, watering the plants, and digging dirt is better than any therapist, and cheaper, too. —Hannah Urban and ­Jonathan Harbour

ARVIN BOOTE, 64, pulls a lever on an ice-cream-cone-shaped metal bin supported by four red poles. In less than two seconds, corn-based cow feed fills a 5-gallon bucket to the top. Boote (pronounced “Boat”) has nine steers in the cattle pen: He isn’t looking to go big, because the nine head will provide plenty of meat for his family and several friends for a year: “God provides me a good living. … He takes care of whatever I need, and I don’t have all of the headaches that some of these large, large guys have, either.”

Boote’s grandfather came to the United States from the Netherlands in the early 1900s and started a family tradition of farming in the Midwest. But farming has changed even since Boote’s father built grain bins on the land that Boote still farms. His father’s grain bins hold 5,000 bushels of corn. Modern bins often hold 15,000-30,000 bushels. When his father farmed, corn harvest usually generated 100 bushels an acre. Now farmers can expect 225-250 bushels per acre, and farms of 300-500 acres face competition from 1,000-3,000-acre mega-farms.

Boote says he likes “being a jack of many trades.” He works with cows, grows corn, raises piglets, repairs old, broken-down machinery—and serves others.

Almost 15 years ago, he considered becoming a pastor. He decided to stick with farming after taking one seminary class and auditing several others, but he’s found that ministry does not require a degree. When his seasonal work schedule allows, Boote travels to help others. He has assisted with disaster recovery in the United States and taken three mission trips to Mexico and nine to Haiti.

Boote stays on the farm not because he has to, but because he likes it. He enjoys driving his equipment, forgoing the automatic steering and GPS that many farm vehicles have now. “A lot of times I’ll turn the radio off and just listen to God. He tells me more things when I’m sitting in a tractor, doing nothing.” —Lauren Dunn and Chloe Baker

AT BROTHERS BICYCLE in downtown Sioux Center, Nathan Nycamp customizes bikes for those with special needs. He once crafted an adult tricycle for a client suffering from balance issues. One organization asked Nycamp for a bike to accommodate a disabled person and a caretaker. He designed a side-by-side bicycle with independent pedaling and one set of primary steering duties.

His shop is a safe and fun place for the Nycamps’ 4-year-old to play, and she’s even beginning to learn to help out with the bike repair work her father does there.

Nycamp’s wife Kirbee has her own business, the Violin House, which she runs from home: She rents refurbished violins, teaches, and—like her husband—builds relationships in Sioux Center. “With a small community, a good name is everything,” Nathan said.

The Nycamps didn’t plan on business careers and didn’t take business courses in college, but they realized that small business ownership would allow them to spend more time with their three young children. Both had parents who could stay at home or work from home, and they didn’t want to be a both-parents-working-full-time household, Kirbee said: “We liked getting to be more in charge of spending time with our family and with our kids.” —Lauren Vanden Bosch and Caleb Bailey

NEW IMMIGRANTS are now adding their talents to the Northwest Iowa mix. Pete Utthachoo and his family serve authentic Thai food to downtown Sioux City at Pete’s Thai on 5th, about 45 miles south of Sioux Center. A native of the central rice-growing plains of Thailand, Utthachoo started cooking in his family kitchen at 5 years old: “We learn from generation to generation. You watch the parents cook and they tell the story.”

When Utthachoo, the youngest of three boys, was 18, he lost his middle brother to tumors and his father to a heart attack. He worked hard, became banquet chef at the Regent Hotel in Thailand, and then emigrated to San Francisco and opened his first restaurant, Pete and Mom Thai Press Restaurant. But Utthachoo struggled to handle labor costs and closed it after two years.

Utthachoo says, “I never give up,” so he opened a Thai restaurant in Sioux City in 2006, calling it Diamond Thai as an engagement present to his now-wife, Chay Vanh. In 2017, he sold the restaurant to take care of his mother, started two eateries in other cities, and in late 2020 returned to Sioux City with Pete’s Thai on 5th.

His wife, sister-in-law, and stepson work with him.

Utthachoo, now 53, has calloused fingers and salt-and-pepper hair. He doesn’t use recipes, and instead prepares his dishes by taste. I watched him prepare chicken pad thai: He added sugar to sweeten the dish and tamarind sauce for a sour touch. The ingredients—rice noodles, egg, chicken, red and green onion, sweet radish, bean sprouts, and peanuts—sizzled in the wok. “Ta-da!” he said, taking the wok from the stove and portioning the pad thai onto a serving tray.

Thai culture is “still on my heart,” Utthachoo said, but he calls Sioux City home: “The place where you live, where you are happy, is what you call home.” —Sam Landstra 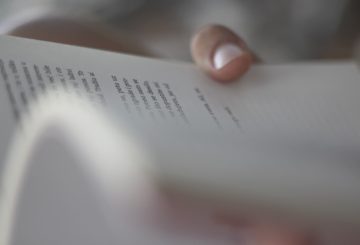 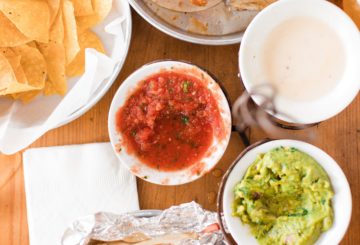 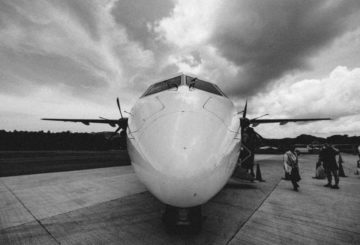